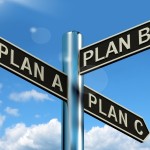 The other day I was told that I had to be let go from my contracting position. I’ll tell you the story and what I learnt in this article.

For those of you who don’t know, I work as a software consultant. I work full-time for a consulting company who then send me out to other companies when work is required.

I’ve been working at my current client for almost two years, and my current project has been prioritised as the most important one in the department, so it’s been pretty busy for the last six to nine months.

I got told on Tuesday morning from my manager that due to funding issues in the entire department, they were trying to save money before the end of the financial year, and as a result, they had to let all of the contractors go.

Which included me. And at least 50 other people in the department.

They were still sorting out the details and the dates, but it looked like I had a few days to hand over my work to another team member and finish up.

I was pretty surprised at this news. I knew something must have gone wrong for them to let go of their contractors.

But, I didn’t feel any anger. No bad feelings at all. I knew it was purely a financial decision and not based on my performance, which my manager assured me.

Then, I had a few thoughts about what would come next. The plan was for me to go back to the “bench”, which is like the waiting area before you get assigned to a client.

What if I was not able to be placed at another client, and got told I was no longer required? As in, actually lost my job?

There was a high chance of this happening, because companies don’t look for staff in June as it’s the end of the financial year and they generally don’t have any money.

What would I do then?

Would I look for another job? Could I contract on my own? Could I focus on this site full-time? Did I have money to last until I found another job?

There were a few options and things I could do.

Fortunately, it’s not all bad news.

My company has found another client for me. This client is actually a team I’ve worked in before, but I’ll be doing a different role there. I’ll be working as an Agile business analyst, similar to what I’m doing now.

Which is great news. I start there immediately, so there’s no break in between clients and a much lower risk of getting made redundant.

I’m writing this article on the way to work on the last day at my current client, and I start at the new place tomorrow.

Throughout this short but intense experience, I’ve learnt a few things.

It’s Good To Keep In Contact With Old Co-Workers

I had kept in touch with the people I used to work with, including this team that I’m returning to. I didn’t do it that much, but there was the occasional email and lunch get together.

As the team worked for the same company I did, I also saw them around social events and other company events that were put on.

A recent article I wrote on why it’s good to keep in touch with old co-workers goes into this point in more detail.

I think the fact that I kept in touch with them has helped me move on to this new role. Even if I didn’t, it’s still a good thing to do. If I had gotten fired, I could have spoken to many other people who may have had open positions for me.

Always Do A Good Job Wherever You Work

This is probably the biggest factor in how I got the new role.

During the last time that I worked for this client, I did a good job there and got good feedback from them. They were about to start another project which was important to the company, and because the team there knew that I was a good worker, I think it helped my case.

Regardless of if you get into this situation or not, it’s a good idea to do a good job wherever you work. If you are looking for a job anytime in the future, you can contact people you’ve worked with, knowing that it will be easier because you’re a good worker, and they know it.

Have a Plan B and Plan C

When I was given the news that I might be moving on, I immediately started thinking about what would come next.

However, it’s something I think about occasionally anyway, even if I don’t have any danger of getting let go.

I’d really like to try contracting at one stage. As in, contracting for myself rather than through another company. I’ll need some more experience in my role to be able to do this, I think, but it’s something I’d like to do.

Also, because I’d kept in contact with people I’d worked with before, and I keep an active LinkedIn profile, there would be a few people I can contact if I needed to get a full-time job at another company. I could work for another consulting firm, or work full time in another IT department.

The lesson here is that we should always have a backup plan, or plan B, and a plan C. Have a couple of options of what you can do, just in case you got let go or something changed that was out of your control.

Make Sure You Have Savings

Another important point is to make sure that you have some money saved up.

I had enough in my bank account to last me about two months. Plus, if I was made redundant, I’d get my annual leave paid out which would have helped a bit.

Ideally, I should have more in my savings account, as many of the personal finance blogs that I read suggest.

If you get let go or fired from a job with zero notice, there’s a chance you won’t get paid again from them, or only get a single payment for your leave. This is a risk if you don’t have any savings.

So, as a way to mitigate that risk, or reduce the impact it would have on you, you should have some money saved up.

That way, if you do get fired, it won’t be as bad because you can survive for a little while. It means you don’t need to take the first job that comes up and can find the job that’s right for you, as you don’t have the pressure of having to start work as soon as possible to pay the bills.

Well, I hope you enjoyed that story and learnt a few things from it. I hope that it doesn’t happen to you, but if it does, there are a few ways you can be better prepared for it.

Career Action Tip: Update your LinkedIn profile and connect with as many old co-workers as you can. Make a plan to build up some savings, if you don’t have any.