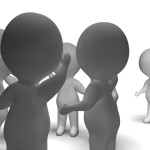 Just recently I was moved off a project that I was working on at work. How should this have been handled? Let me share a few tips in this article.

I work as a business analyst in a team that works on many projects. The way that we work means that we can handle several projects at a time. I was assigned a new project recently, but I was given a more senior role in it.

This was great. I thought I must have been doing something right! It also means that there was a lot more work to do in this role.

I spent the next few days learning about the project, reading notes and documents, and attending meetings. It was a little overwhelming at first, not just because of the new project, but the senior role meant I had to know even more about the project.

All was going well, until about a week later, one of the managers found out that I was working on this project in the senior role and said that I shouldn’t be doing that. They believed that it was too much work for someone with little experience. They felt that someone more experienced should take that role.

At first I was quite annoyed. Mainly because I had only been on the project for a week and felt that I could do this senior role but wasn’t given the chance. The news actually distracted my work for a few hours (which isn’t a good thing). I didn’t make a scene or have an argument with this person, as it was in the workplace and didn’t think it would make a difference.

After I thought about it for a while, I realised that this person had a good point. It was a senior role that required more attention, and the project was bigger than I originally thought and needed to be done effectively. I also had about six other projects to work on (which is more than most), and they didn’t want to run the risk of me being “spread too thin”, where I didn’t have enough time to work on it.

The main thing that made me realise that getting kicked off a project was the right thing to do was that it was better for the project.

Nobody wanted the project to fail. I didn’t, my manager didn’t, and the team didn’t. I realised that me not working on the project in this senior role means that someone else can take it, who has more experience, and as a result, could probably deliver it better than I could.

Thinking of the bigger picture when these things happen is a good way to stay calm with these kinds of decisions. If it’s better for the team or the company as a whole, it might be worth considering.

Put Yourself In Their Shoes

Another related point is that you should try to put yourself in their shoes. Try to imagine what this person, the one who is kicking you off the project, is thinking. What drives them to do a good job? What performance are they looking for? What happens if the project fails?

Thinking of all of these points means that you can be more empathetic towards their decision, and it makes you understand it easier. If you were kicked off a project, try to understand the decision behind it from their point of view. You might disagree, but trying to understand why they made it may help you.

Have A Conversation With Your Boss

If you’re still not convinced that it was the right decision, you can have a one-on-one conversation with your manager. This is what they are here for. Approach them and ask to speak to them in private, as it’s not a good idea to have these conversations in the open.

Mention to your boss how you feel about getting kicked off the project, and ask them what he or she thinks of the situation. Try to remain calm and listen to their answer. They may agree with you or disagree, but they should give some reasons, depending on if they were the one that kicked you off the project.

This has two benefits. It lets you explain why you feel a certain way, and it lets you hear your manager’s opinion. It can help you understand the decision.

I’m not worried about my chances of getting this kind of role in the future. Someone thought I was up to the task initially, so if a smaller project comes along that I could do, then I may get assigned the work on that one.

I hope these tips have helped you if you’re getting kicked off a project. Has this ever happened to you? What did you do about it?

Career Action Tip: Think about the next step in your career, such as a more senior role, and think about what is involved to get that role.