What Are Oracle SQL Analytic Functions? 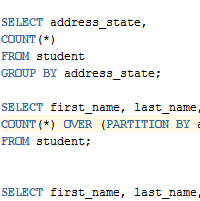 In this article, I explain what Oracle SQL analytic functions are, how they are different from other functions, and show you some examples.

What Are Oracle SQL Analytic Functions?

Analytic functions are functions that calculate an aggregate value based on a group of rows.

With analytic functions, however, you can group the data that is used to calculate the function’s result, but show a value one each record in the result set, without grouping.

Many of the aggregate functions can also be used as an analytic function.

Let’s take a look at an example.

If you had a table that looked like this:

What if you want to find the number of students in each state, and display that next to each student record?

This would work, but it would only show the states and the count. It doesn’t show the student information.

I could add the student information, but then the COUNT(*) records would only show 1, because they are grouped by the student’s first_name and last_name.

This is where analytic functions come in.

You can use the COUNT function as an analytic function

The COUNT function as an analytic function would look like this:

This will find the COUNT of records for each state – but will not require any grouping in the SELECT statement.

As you can see, all of the student records are shown, along with their state, and the number of records that state contains.

What Is The PARTITION BY Clause?

As you can see in the earlier example, the PARTITION BY specifies how the function groups the data before calculating the result.

It works similar to a GROUP BY, but it doesn’t reduce the number of rows that are shown in the result set.

If you don’t include the PARTITION BY, then you’ll get this result:

The state_count column shows an overall COUNT for all records, and displays it for each row.

Why Can’t I Just Use Subqueries?

You might have noticed that you can get the same results using subqueries and joins.

This is true. But, there are some advantages of using Oracle SQL analytic functions instead of subqueries and joins to get this result.

When Are Analytic Functions Performed?

This means that the analytic functions can only appear in the SELECT list or the ORDER BY clause.

Can You Nest Analytic Functions?

While aggregate functions allow you to nest functions, you can’t do the same thing with analytic functions.

Can You Use Multiple Analytic Functions in the Same Query?

You can also have the same analytic functions but use different query_partition_clause values as well.

What Is The ORDER_BY_Clause Within Analytic Functions?

The order_by_clause within an analytic function is different to the ORDER BY clause for the entire query.

This clause specifies how data is ordered within a partition.

For some analytic functions, such as COUNT and MAX, the order does not matter.

However, other functions such as LEAD, LAG, and RANK, the order does matter. So, this is how the ordering is done for those functions.

What Is The Windowing Clause?

The windowing_clause allows you to specify a range of rows that are used to perform the calculations for the current row. This is part of the window function syntax.

The syntax of the windowing_clause is quite complicated, but here it is:

The start_expr can be any of:

And the end_expr can be any of:

Let’s take a look at an example using the ROW type syntax.

You can see here that the state_count is a little different. It only counts the records in the range that has been mentioned in the ROWS clause.

The ROWS BETWEEN 2 PRECEDING AND 1 FOLLOWING means that rows are only counted where the address_state equals the current records address_state, and only for the two rows before it and the one row after it.

This is why some of the Texas rows have a state_count of 2 and others are 3.

What Is The List Of Oracle SQL Analytic Functions?

Here’s a list of the Oracle SQL analytic functions. Many of them are also aggregate functions.

So, in conclusion, analytic functions can be used to find totals of data within different groups. They are very useful for analysing data, whether you’re getting data for an application or working on a data warehouse.