How to Set Up an SQL Server Database on Docker

In this guide, you’ll learn:

Let’s get into it.

What is Docker and Why Use it for a Database?

Docker is a tool that allows you to run applications in their own areas of an operating system (inside a “container”).

Using Docker is common for application development teams to run the applications in, from what I’ve seen. But running databases inside them is not as common.

Why Use Docker for a Database?

Why would we use Docker for our database? There are several reasons.

There are probably many more advantages related to deployments and automation which I won’t cover here.

The other thing you should know is that the data in the SQL Server database is not persisted. Unlike a Virtual Machine, containers can be stopped and started without the data being saved. So, be aware of this when working with your database.

It’s possible to persist data, and it’s possible that certain settings or commands here can show the data is persisted and I may be wrong, but it’s something to keep in mind.

Let’s get started with setting up the database.

At a high level, here are the steps we’ll take in this guide:

The screenshots in this guide are taken on a Mac, but the same process should be possible on Windows too.

If you’d like to watch a video of this process, check it out here:

To get started, we need to download the Docker application. This will allow us to run the container which contains the database.

Step 3: Select the right version for your computer. This would be either of the two Mac versions or a Windows version. The Docker setup file will then begin downloading to your computer. It’s about 580 MB so it may take a few minutes to download.

Step 4: Install the Docker application once it has downloaded. This can be done by opening the file on macOS and dragging it to the Applications folder, or following the installation steps in Windows.

It takes a couple of minutes to install.

Step 5: Run Docker. This will cause the Docker service to start.

Now we’ve got Docker installed and runnings, it’s time to get our database files.

The files that Docker uses to run applications are called images. An image is a pre-built collection of files.

These images are available to download on a website called Docker Hub. There is a whole range of images there for different technologies. The one we’re looking for is for the SQL Server database. 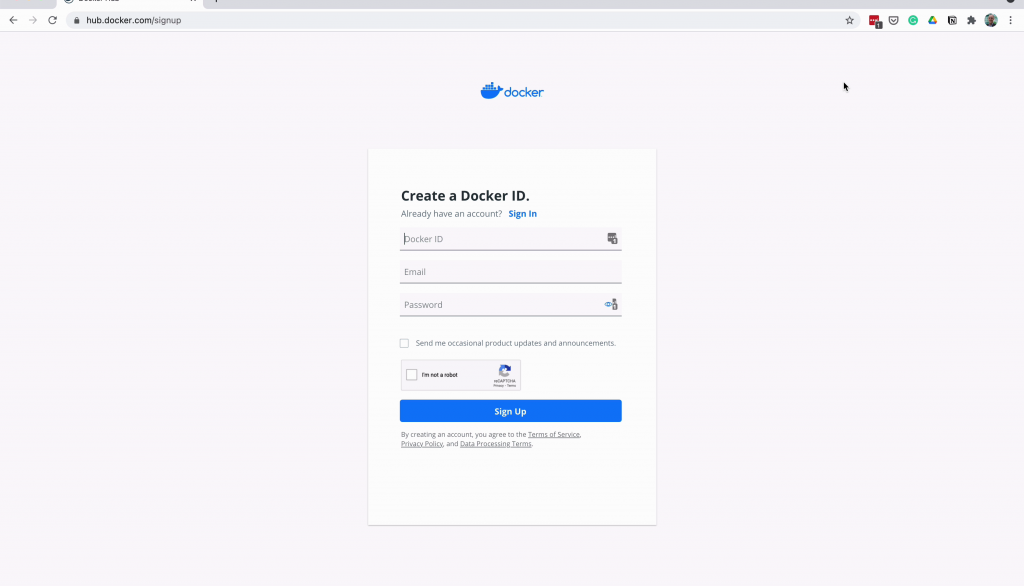 Step 3: Enter your details on the Sign Up page.

Remember your password here as you’ll need it later.

Step 4: On the Choose Your Plan page, select Free. This is enough for our purposes. Step 5: Verify your email address by clicking the link in the email you receive.

You should end up at the Docker Hub homepage and should be logged in.

It’s time to find the image for the SQL Server database. We’re going to get the URL for the image, and use this URL as part of a command we’ll run on the command line.

Step 1: Enter the term “SQL Server” into the search bar at the top of the page and press Enter.

Step 2: Click on the Microsoft SQL Server entry in the search results.

This page shows the details of the SQL Server database image.

Step 3: Copy the command from the example.

If you scroll down a little, you can see a few sample commands under the “How to use this image” section. Copy the command from the first example here, which is the CU8 version of SQL Server 2017.

There are a few things to note in this command.

We have an account on Docker Hub and have found the SQL Server Database image to download.

The next steps are to download the image. We’ll do this on the command line. We need to login to Docker before downloading the image, and this is the command to do it.

Step 3: Enter your username and password, which is what you entered when you set up your Docker Hub account.

Step 4: Enter the docker run command from the example.

Now we have logged in, we can download the image. This can be done using the “docker pull” command, which is the command in the black box we saw on the Docker Hub page.

However, we can also use the “docker run” command, which will run the container if it exists on your computer already, and download it if it does not exist.

Here’s the command to run:

Before you press enter, you may want to change the password from “yourStrong(!)Password” to something else. It’s up to you. The password mentioned here will work.

You should also add a name for the container. This makes it easier to refer to in the future. To do this, add this to the end of the command:—name sqlserver. That’s two dashes, then name, then space, then the name you want to give it such as sqlserver.

So the final command is:

The image will then start downloading. It’s a few gigabytes so it may take some time.

If you get an error about the name already being used, then it’s likely because you have run this command in the past and the container name of “sqlserver” is already created. If so, you can start the existing container. To do this, type “docker start sqlserver”.

After the image is downloaded, it’s time to run it. Because you ran the “docker run” command earlier, this will run the image after it’s downloaded and the container will be created.

We can check the status of the container by running the “docker ps” command.

This shows a list of all containers that are running.

In the Status column, you’ll see something like “starting” that indicates the container is starting up.

Run the command in a minute or two and you should see a status of “Up X seconds”. This means the container is running.

We now have a Docker container running with our SQL Server database!

Connect to Database and Run SQL

Now the container is running, we can connect to it.

Many tutorials online specify you can login to the container itself using the command line. But we want to use an IDE on our computer to connect, as it’s easier to do and easier to work with.

We’ll use Azure Data Studio to connect, which is Microsoft’s freely available IDE that works on Windows and MacOS. You can use whatever IDE you want. I’m not using SQL Server Management Studio in this demo, as it doesn’t run on a Mac, but the process should work with Management Studio. But you can use any IDE you like that can connect to SQL Server (see the full list here).

Step 1: Open your IDE, such as Azure Data Studio. The connection details to use are available on the image page on Docker Hub, and are also in the command we ran. We’ll enter them here.

Check the Remember Password box if you want the password to be stored with the connection (and not have to enter it each time).

Leave everything else as the default. If everything has been set up correctly, the connection should be successful. If there are any errors, take a look at the description and comments where I’ll list a few ways to resolve them.

You should see a screen that looks like this. In other IDEs, you may get taken directly to an SQL editor screen.

In Azure Data Studio, click on the New Query button. A new SQL tab will be displayed. Enter a simple query, such as:

This should show the version of SQL Server you’re running.

You’ll see the output on the screen. This is the result of the query on the SQL Server Database inside the container. It shows SQL Server 2017 which is the version we chose on Docker Hub. Congratulations! You’ve successfully set up an SQL Server database inside a Docker container and connected to it!

If you have any errors, let me know in the comments below.

If you want to stop the database, you can use the docker stop command.

Step 1: Return to the terminal.

This command will stop the container called sqlserver.

To start it again, use the docker run command we saw earlier.

Using Docker for an SQL Server database is useful for many reasons, especially if you use a Mac and want to get started with SQL Server. It’s fairly simple to set up and can be started and stopped pretty easily.