Calculating the mean, median, and mode in Oracle SQL is a task often performed by report developers or anyone else working with SQL. Learn how to calculate these three values from a range of data in this article.

What is the Mean, Median, and Mode, and Standard Deviation?

Mean, median, and mode are three kinds of average values that can be obtained from a set of data. 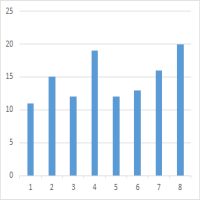 How Can I Calculate the Mean in Oracle SQL?

Let’s say we had a table of data called movie_ratings that looked like this:

How could we find the mean of these values?

We can use the AVG function.

How Can I Calculate the Median in Oracle SQL?

To calculate the median in Oracle SQL, we use the MEDIAN function.

The MEDIAN function returns the median of the set of provided values.

The MEDIAN is the middle value in a set of values.

So, for example, you had these five values:

The median of these would be the middle value after they have been ordered in ascending order. So, the median would be 18.

The MEDIAN function can be used as either an analytic function or an aggregate function.

The parameters of the MEDIAN function are:

The expr value can be any numeric data type. The MEDIAN function returns the same data type as the expr value.

If you specify the OVER clause, Oracle will work out the data type with the highest precedence and return that type.

You can see that the median is 14. This is because the middle value would be 14.

While there are 8 values and there is no middle value, the median is calculated as the point between the two middle values.

So, if we order the values they would be:

How Can I Calculate the Mode in Oracle SQL?

To calculate the mode, we need to use the STATS_MODE function.

The mode is 12 as that is the most occurring value in the table.

Show the Mean, Median and Mode All In One Query

Let’s use these examples to show the mean, median, and mode all in the same query.

As you can see, the values here are the same as the earlier examples.

So, that’s how you find the mean, median, and mode in Oracle SQL.

Examples of the MEDIAN Function

Here are some further examples of the MEDIAN function. I find that examples are the best way for me to learn about code, even with the explanation above.

This example finds the median using it as an aggregate function.

It shows the value of 300 because this is the middle value in the column after it has been ordered.

This example uses the MEDIAN function as an analytic function

This example shows the median fees_required when grouped by the home_state for each record in the table.

How to Find the Standard Deviation in Oracle

Another statistic you may want to find is the standard deviation.

This can be achieved with the STDDEV function.

The purpose of the STDDEV function is to find the standard deviation of a set of numbers.

The standard deviation is a mathematical concept, which is a number that represents how much the values in a group differ from the mean value in a group.

This function can be used as either an analytical function or an aggregate function.

The syntax for the STDDEV function when it is used as an aggregate function is:

Alternatively, the syntax when used as an analytical function is:

STDDEV ( [DISTINCT | ALL] expression ) [OVER (analytical_clause) ]

The parameters of the STDDEV function as an aggregate function are:

The parameters of the STDDEV function as an analytical  function are the same, but also include:

Examples of the STDDEV Function

Here are some examples of the STDDEV function. I find that examples are the best way for me to learn about code, even with the explanation above.

This example uses the STDDEV funiotn as an aggregate function.

This example uses the STDDEV function as an aggregate function again, but I’ve used the DISTINCT keyword.

This example uses the STDDEV function as an analytical function.

You can see that for each of the enrolment_mth values that are the same, the stdev_val is the same.

So, that’s how you find the mean, median, mode, and standard deviation in Oracle SQL.

6 thoughts on “How to Calculate the Mean, Median, and Mode in Oracle”