Email. It can be a mess. Have you ever looked at your inbox at work and seen a massive list of emails, and not know what to do with them?

I used to get that as well. This was until about a year ago when I changed the way I handle my email at work.

I’ll explain what my strategy is, and how it allows me to organise email at work, and show you how you can implement it as well.

“Oh, great, another way to manage my email”, you’re probably thinking. There are already a lot of blog posts and guides out there that show you how to manage your email.

Terms like “inbox zero”, “only look at an email once” and “don’t check your email too often” are thrown around a lot.

Well, they have some merit. But it can be easier said than done.

The email strategy I’ve been using allows me to focus on what I need to be doing, and keep track of what I get asked to do via email.

I learnt this strategy from a book that my previous project manager lent me. She said it has really helped her, so I read the book and implemented what it suggested, with a few changes. I don’t actually remember the name of the book. But it’s allowed me to organise email at work, which is a big time saver.

The Benefits Of This Strategy

There are a few reasons:

So, how does it work?

How Does This Strategy Work?

It uses two sets of five folders, one in the Inbox and one in the Sent mail. Three of the folders are “To Action” folders with different priorities. One is a “Waiting for Response” folder. There’s also a folder to store all of your other emails, which may be organised by project or by team.

Each time you receive an email, you read it, and move it to one of these folders if you need to do something with it, or move it to your project folder.

Sounds simple? Well it is. There’s a bit of setup to do, but after that, you’re ready to go.

In this strategy, I assume you’re using Microsoft Outlook. If you’re using another application, you should be able to apply the same steps.

Step 1 – Set Up Five Folders In Your Inbox

To start, create five new folders within your inbox:

The Project Name folder will depend on the way you do you work. If you work on one project, name this the same as your project. This is where all emails go that don’t require action.

The “To Action” folders store emails that require you to take some action. There are three of them (Now, Soon, and Later), so you can see which emails need to be looked at now (or whenever you get the chance), soon, or later. It’s kind of like a High/Medium/Low priority list.

The “Waiting for Response” folder is for emails you get sent that you’re waiting for someone to send you more information.

For example, if your coworker Sam sends you an email saying “Here’s part 1 of the document, I’ll send you part 2 on Friday”, you can move this email into the Waiting for Response folder because you’re waiting on him to do something. Then, in a couple of days, you can check this folder and decide if you did get a response to that email or not.

Or, if your manager sends you an email and asks for more information about a project by the end of the day, you can move it to the “To Action Now” folder, which means you can look at it as soon as you have time.

Step 2 – Set Up Five Folders In Your Sent Mail

You can set up the same five folders in your Sent Mail folder.

The concept works the same way as the Inbox, but it’s for emails you send. These folders work much better if you know exactly how many emails are in each folder. You’ll only need to know this for these folders though:

You can change this setting in Outlook:

Repeat this for each folder.

Doing this will mean you can see how many emails are in the To Action Now folder, for example, and helps you to not forget about them.

Step 4 – Move Your Emails From Your Inbox and Sent Items

This is probably the hardest part. But once you’ve done it, your email will be easier to manage. 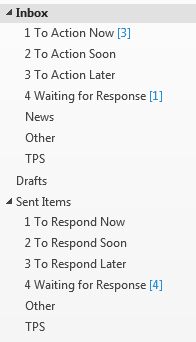 Have a look at all of your emails in your inbox. Do any of them need you to take some action? Perhaps you’ve marked them as unread or flagged them somehow.

You should now see an empty inbox, and some emails in your To Action and Waiting for Response folders.

Now, repeat the same task for your Sent emails. It’s likely that you’ll have some in the Waiting for Response folder and not many in the To Action folders, but this will depend on the kind of work you do.

Also, after you’ve actioned one of the emails in one of these folders, you can move it to the Project folder.

Great. Now your Inbox and Sent Items are empty.

How can we keep it that way?

A great feature in Outlook 2013 is something called Quick Links. They are buttons you can add to the top of your main Outlook window that perform certain tasks on your email, which you can define.

For this email strategy, I’ve defined a few:

After you’ve set up this system, it’s easy to see which emails need you to do something and which ones don’t.

But, the hard part is keeping it up. It can be easy to just let emails pile up in your Inbox again, but that makes you less effective.

So, this is the system that I use, and it’s working well for me.

People have often commented on how I’m able to keep a clean inbox and how I can keep track of emails so easily. It really helps organising your email like this.

Career Action Tip: If you’re struggling with keeping up with your email, try setting up the folders I’ve mentioned.