When you’re learning SQL or database design, it’s helpful to use other databases as a reference.

Many articles online refer to Oracle’s HR database, or SQL Server’s AdventureWorks database. These can be helpful, but often you’re looking for answers that these databases don’t help with.

This post describes a sample database containing data about movies. It includes:

Why is this helpful? Firstly, you can understand more about how a movie database might work.

Also, you can practice SQL against realistic data and write your own queries, both simple (how many movies has Tom Cruise been in?) and complex (which movies have Tom Cruise and Matt Damon both been in?).

So, let’s take a look at the database.

The ERD or database design of the sample movie database is here (open in new tab, or save, to see a larger version): 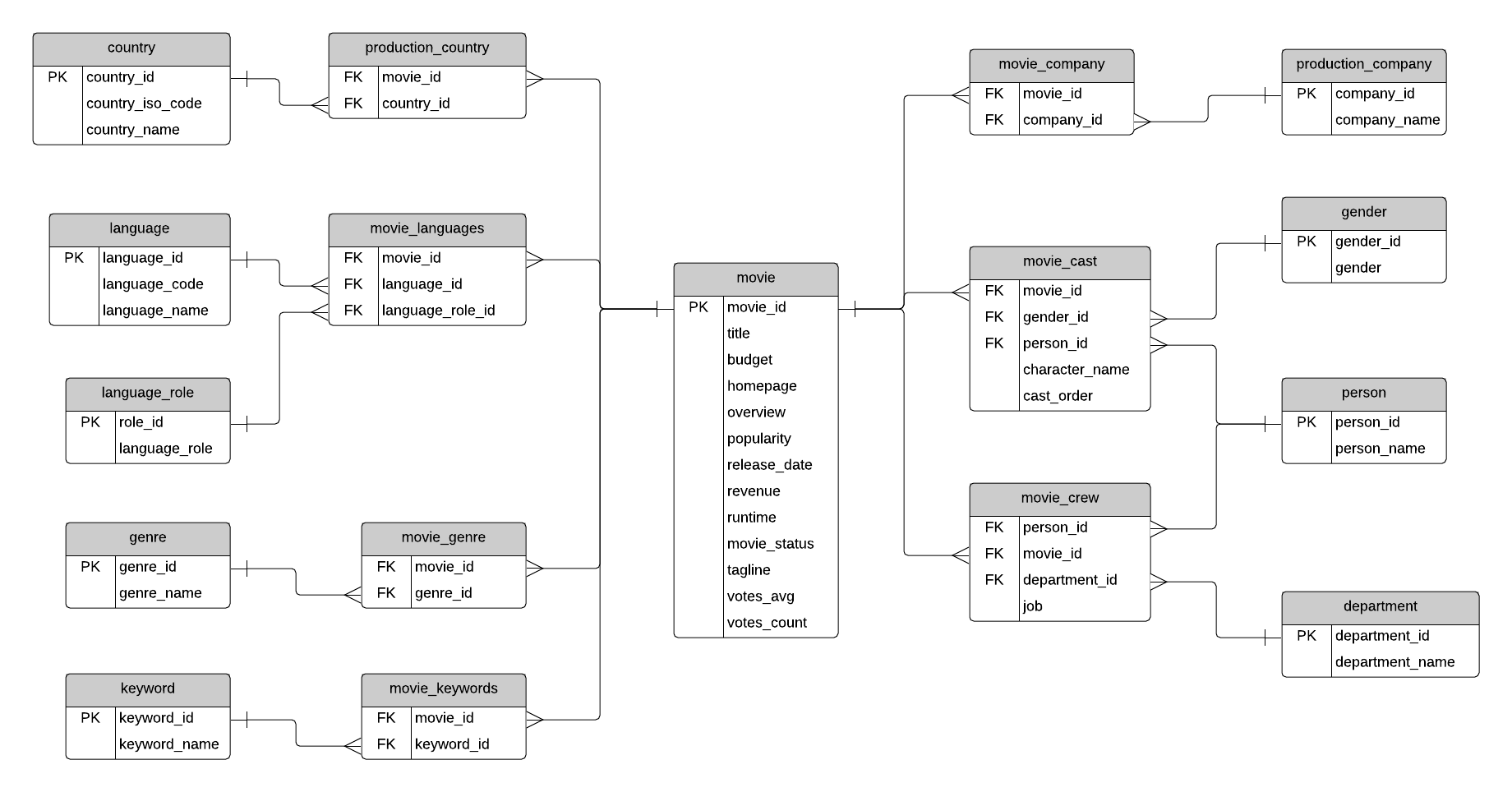 The sample data was obtained from a free online data source. It contains about 4,800 movies, 104,000 cast and crew, and thousands of metadata records such as languages and keywords.

What do all of these tables and columns mean?

The movie table contains information about each movie. There are text descriptions such as title and overview. Some fields are more obvious than others: revenue (the amount of money the movie made), budget (the amount spent on creating the movie). Other fields are calculated based on data used to create the data source: popularity, votes_avg, and votes_count. The status indicates if the movie is Released, Rumoured, or in Post-Production.

The country list contains a list of different countries, and the movie_country table contains a record of which countries a movie was filmed in (because some movies are filmed in multiple countries). This is a standard many-to-many table, and you’ll find these in a lot of databases.

The same concept applies to the production_company table. There is a list of production companies and a many-to-many relationship with movies which is captured in the movie_company table.

Genres define which category a movie fits into, such as Comedy or Horror. A movie can have multiple genres, which is why the movie_genres table exists.

The same concept applies to keywords, but there are a lot more keywords than genres. I’m not sure what qualifies as a keyword, but you can explore the data and take a look. Some examples as “paris”, “gunslinger”, or “saving the world”.

The cast and crew section of the database is a little more complicated. Actors, actresses, and crew members are all people, playing different roles in a movie. Rather than have separate lists of names for crew and cast, this database contains a table called person, which has each person’s name.

The movie_cast table contains records of each person in a movie as a cast member. It has their character name, along with the cast_order, which I believe indicates that lower numbers appear higher on the cast list.

The movie_crew table follows a similar concept and stores all crew members for all movies. Each crew member has a job, which is part of a department (e.g. Camera).

I’ve prepared some sample data for this database. You can use this to create this database on your own computer, explore the tables, and write SQL on it.

The sample data is available for Oracle, SQL Server, MySQL, and Postgres, and is stored on my GitHub repository. Find out how to access it and load the data here: Sample Data for SQL Databases

With the sample data in the database, let’s take a look at some of the data in the movie table. This query shows the movie title, budget, and other attributes of the movie, sorted by the movies with the highest revenue.