If you’ve worked with Oracle databases recently, you may have heard of the terms “pluggable database” and “container database”.

In this guide, you’ll learn:

Let’s get into it.

What is a Container Database and Pluggable Database?

In Oracle 12c, a new architecture or design of the databases was introduced, called “container databases” or “multitenant architecture”.

The Oracle database can function as a “multitenant container database”, otherwise known as a CDB. This CDB can include zero or more “pluggable databases”, or PDBs.

A PDB is a collection of schemas and objects that act like a “regular” database to applications and IDEs.

If you’ve been working with Oracle for a while and this CDB and PDB structure is new to you, then the simple answer is that a PDB is like a “regular database” that you work with.

But, it’s much more than that.

An Oracle CDB has many containers. A container is either a PDB or the root.

Here’s a diagram to represent it. 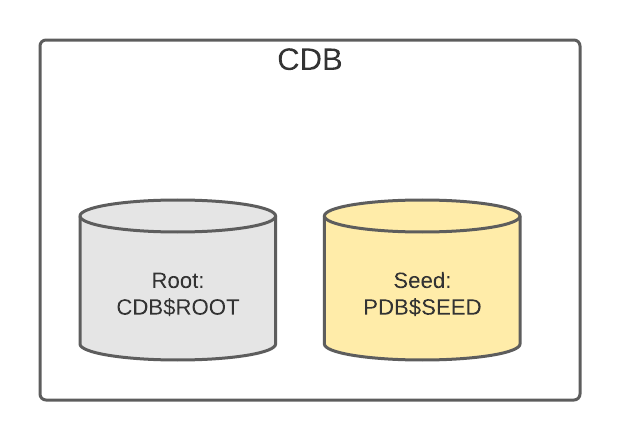 This diagram shows that the database contains the CDB. Inside the CDB are two containers:

There are no other PDBs created by default in an Oracle database, if you’re using the full version of Oracle.

PDBs can be created by you (assuming you have the right privileges). 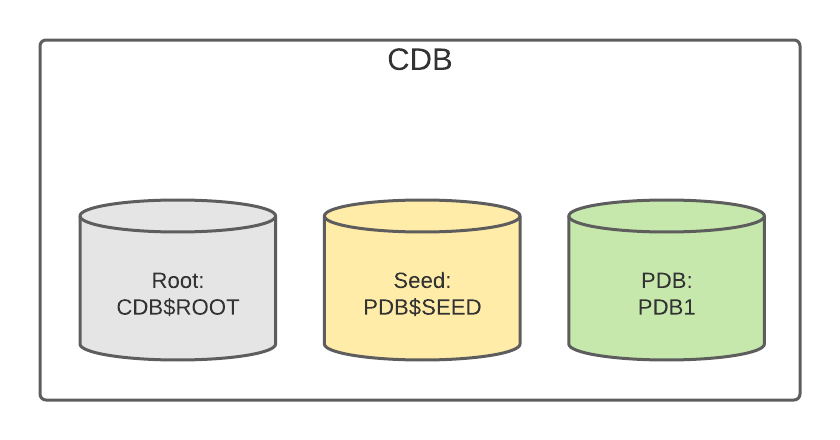 We’ll explain how to create a PDB later in this guide.

This is what it looks like as a diagram: 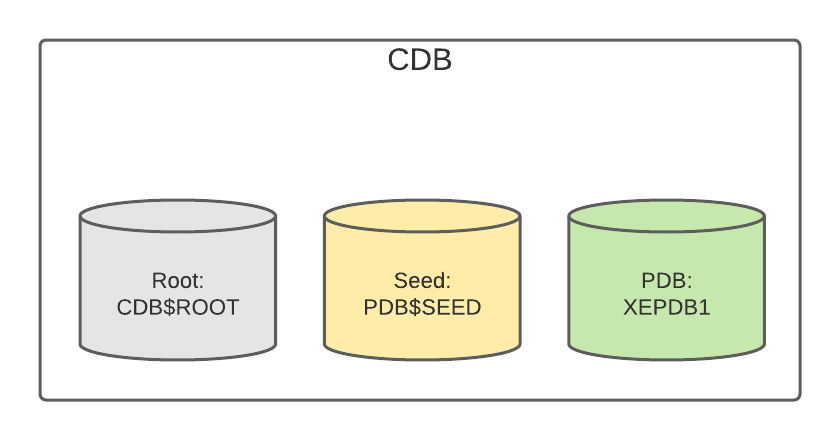 We can see the root container, the seed PDB, and the default PDB (called xepdb1) that comes with the database.

So, Oracle uses this new CDB and PDB architecture. What are the benefits of this? Can’t you just create different databases or VMs?

Well, you can, but the benefits of using this architecture are:

The non-CDB architecture (the way the databases work before 12c) is available in recent versions, but it was deprecated in Oracle 12c and desupported in Oracle 20c.

Connect to an Oracle CDB

You can connect to an Oracle container database (CDB) in the same way as connecting to any other database.

If you’re a developer, you may not do this very often, as many of your connections and work will be done on a PDB.

In SQL Developer this is done by specifying:

Here’s the connection screen in SQL Developer if you want to connect to Oracle Express. Connect to an Oracle PDB

If you want to connect to an Oracle pluggable database (PDB), you can do that in a similar way to a CDB.

There are a couple of things to remember:

In SQL Developer this is done by specifying:

Here’s the connection screen for connecting to a PDB in Oracle Express. Switch Between Containers (CDB and PDB)

This means you can:

This is helpful if you connect to the wrong container or want to work on a different container.

You can change containers by using the Alter Session command.

This will change your connection to the pdb1 database, which is a pluggable database.

If you’re on Oracle XE, your command may look like this:

To change to the CDB, you specify CDB$ROOT.

You can then run the SQL that you want to on the container you’re connected to.

View Information about the CDB and PDB

Once you’ve connected, you may want to know what container you’re connected to and a bit more information about the environment.

There are a few things you can see.

Showing the name of the container you are connected to is very handy, as it can help you decide what commands to run next or whether you need to switch containers.

This is done with the SYS_CONTEXT function. You can use the SHOW CON_NAME command, but this only works on SQL*Plus.

To find the container name, use the parameter of CON_NAME:

We’ve specified the Oracle DUAL table because we don’t need data from any table here.

When we run this on the CDB, we see this:

When we run this on a PDB, we see this:

So, this can help us see the name of the container we’re running this on.

We can expand on the use of the SYS_CONTEXT function to show the container ID and the database name.

This will show the following information when run on a CDB:

When run on a PDB, here’s what you see:

The CON_ID values are predetermined.

To create a new CDB, use the Create Database command with the suffix Enable Pluggable Database.

This will create a new CDB, with a root container of CDB$ROOT and a new seed PDB of PDB$SEED.

If you omit the ENABLE PLUGGABLE DATABASE, then this new database is a non-CDB, and can never be changed to contain PDBs.

To create a pluggable database, you need to be connected to the CDB with the container set to the root (which is the default). You must also have the Create Pluggable Database privilege.

To create a PDB:

This will create a new pluggable database called my_new_pdb. This will contain the full data dictionary and internal links to objects in the root container.

There are several other ways to create a PDB:

Once the PDB is created, you can connect to it and begin working on it.

Oracle database contains many dynamic views in the data dictionary that are used to see information about objects.

These views had prefixes, such as dba_, all_, and user_. Each of these prefixes indicates views that show different levels of information.

After Oracle 12c and the CDB/PDB functionality, the information shown in each of these types of views was different. There is also a new series of views added which have the prefix of cdb_.

Here’s how they changed:

You may not notice a difference in how you use these, but it’s good to know how they have changed.

The Oracle multitenant architecture may seem confusing if it’s new to you, but the concept of a container DB and a pluggable DB can be understood easier after you work with it for a while.

If you’re a developer and work with an Oracle database, you may not notice any difference except your connection strings are different.

There are many advantages of working with pluggable databases for administrators.

I hope this article was helpful for you to understand CDBs and PDBs.

If you have any questions or comments, leave them in the comments section below.